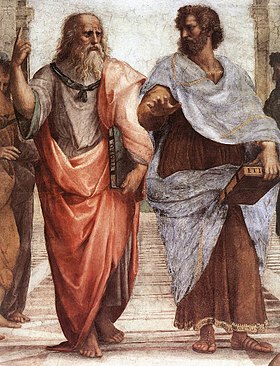 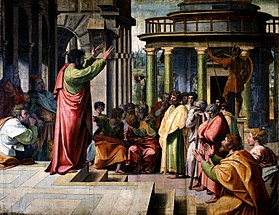 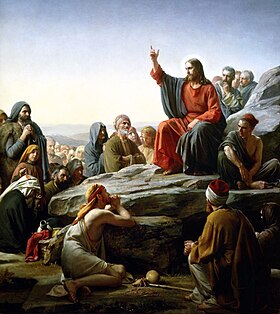 For I myself, when I discovered the wicked disguise which the evil spirits had thrown around the divine doctrines of the Christians, to turn aside others from joining them, laughed both at those who framed these falsehoods, and at the disguise itself and at popular opinion and I confess that I both boast and with all my strength strive to be found a Christian; not because the teachings of Plato are different from those of Christ, but because they are not in all respects similar, as neither are those of the others, Stoics, and poets, and historians. For each man spoke well in proportion to the share he had of the spermatic word, seeing what was related to it. But they who contradict themselves on the more important points appear not to have possessed the heavenly wisdom, and the knowledge which cannot be spoken against. Whatever things were rightly said among all men, are the property of us Christians. For next to God, we worship and love the Word who is from the unbegotten and ineffable God, since also He became man for our sakes, that becoming a partaker of our sufferings, He might also bring us healing. For all the writers were able to see realities darkly through the sowing of the implanted word that was in them...

For, like farmers who irrigate the land beforehand, so we also water with the liquid stream of Greek learning what in it is earthy; so that it may receive the spiritual seed cast into it, and may be capable of easily nourishing it. The Stromata will contain the truth mixed up in the dogmas of philosophy, or rather covered over and hidden, as the edible part of the nut in the shell. For, in my opinion, it is fitting that the seeds of truth be kept for the husbandmen of faith, and no others. I am not oblivious of what is babbled by some, who in their ignorance are frightened at every noise, and say that we ought to occupy ourselves with what is most necessary, and which contains the faith; and that we should pass over what is beyond and superfluous, which wears out and detains us to no purpose, in things which conduce nothing to the great end. Others think that philosophy was introduced into life by an evil influence, for the ruin of men, by an evil inventor. But I shall show, throughout the whole of these Stromata, that evil has an evil nature, and can never turn out the producer of anything that is good; indicating that philosophy is in a sense a work of Divine Providence.

THE preceding Book, which is the tenth of the Evangelical Preparation, was intended to prove by no statements of my own, but by external testimonies, that as the Greeks had contributed no additional wisdom from their own resources, but only their force and elegance of language, and had borrowed all their philosophy from Barbarians, it was not improbable that they were also not unacquainted with the Hebrew Oracles, but had in part seized upon them also; seeing that they did not keep their hands clean from theft even of the literary efforts of their own countrymen...

Moreover in the same Book we learned by the comparison of dates that they were very young in age as well as in wisdom, and fell very far short of the ancient literature of the Hebrews.

Such were the contents of the preceding Book: but in this present one we hasten on at once to pay as it were a debt, I mean the promise which was given, and to exhibit the agreement of the Greek philosophers with the Hebrew Oracles in some if not in all their doctrinal theories.

The patrologist Berthold Altaner writes in regards to Justin the Martyr and his expression “seeds of the Word”:

Jesus of Nazareth compared himself to a sower of seeds when he proclaimed the wikipedia:Parable of the Sower to the crowds of people listening to Him.

3 And he spoke to them at length in parables, saying: “A sower went out to sow. 4 And as he sowed, some seed fell on the path, and birds came and ate it up. 5 Some fell on rocky ground, where it had little soil. It sprang up at once because the soil was not deep, 6 and when the sun rose it was scorched, and it withered for lack of roots. 7 Some seed fell among thorns, and the thorns grew up and choked it. 8 But some seed fell on rich soil, and produced fruit, a hundred or sixty or thirtyfold. 9 Whoever has ears ought to hear.” ... 18 “Hear then the parable of the sower. 19 The seed sown on the path is the one who hears the word of the kingdom without understanding it, and the evil one comes and steals away what was sown in his heart. 20 The seed sown on rocky ground is the one who hears the word and receives it at once with joy. 21 But he has no root and lasts only for a time. When some tribulation or persecution comes because of the word, he immediately falls away. 22 The seed sown among thorns is the one who hears the word, but then worldly anxiety and the lure of riches choke the word and it bears no fruit. 23 But the seed sown on rich soil is the one who hears the word and understands it, who indeed bears fruit and yields a hundred or sixty or thirtyfold.”

16While Paul was waiting for them in Athens, he grew exasperated at the sight of the city full of idols. 17So he debated in the synagogue with the Jews and with the worshipers, and daily in the public square with whoever happened to be there. 18Even some of the Epicurean and Stoic philosophers engaged him in discussion. Some asked, “What is this scavenger trying to say?” Others said, “He sounds like a promoter of foreign deities,” because he was preaching about ‘Jesus’ and ‘Resurrection.’ 19They took him and led him to the Areopagus and said, “May we learn what this new teaching is that you speak of? 20For you bring some strange notions to our ears; we should like to know what these things mean.” 21Now all the Athenians as well as the foreigners residing there used their time for nothing else but telling or hearing something new.22Then Paul stood up at the Areopagus and said:“You Athenians, I see that in every respect you are very religious. 23For as I walked around looking carefully at your shrines, I even discovered an altar inscribed, ‘To an Unknown God.’ What therefore you unknowingly worship, I proclaim to you. 24The God who made the world and all that is in it, the Lord of heaven and earth, does not dwell in sanctuaries made by human hands, 25nor is he served by human hands because he needs anything. Rather it is he who gives to everyone life and breath and everything. 26He made from one the whole human race to dwell on the entire surface of the earth, and he fixed the ordered seasons and the boundaries of their regions, 27so that people might seek God, even perhaps grope for him and find him, though indeed he is not far from any one of us. 28For ‘In him we live and move and have our being,’ as even some of your poets have said, ‘For we too are his offspring.’ 29Since therefore we are the offspring of God, we ought not to think that the divinity is like an image fashioned from gold, silver, or stone by human art and imagination. 30God has overlooked the times of ignorance, but now he demands that all people everywhere repent 31because he has established a day on which he will ‘judge the world with justice’ through a man he has appointed, and he has provided confirmation for all by raising him from the dead.”32When they heard about resurrection of the dead, some began to scoff, but others said, “We should like to hear you on this some other time.” 33And so Paul left them. 34But some did join him, and became believers. Among them were Dionysius, a member of the Court of the Areopagus, a woman named Damaris, and others with them.