The New Gods are a fictional race appearing in the eponymous comic book series published by DC Comics, as well as selected other DC titles. Created and designed by Jack Kirby, they first appeared in February 1971 in New Gods #1.

Despite the creative strength of Kirby's material, the book's sales slipped steadily after a strong start. Despite the sales failure of the book, Kirby's work has remained an inspiration for future comics creators. Comics historian Les Daniels observed in 1995:

"Kirby's mix of slang and myth, science fiction and the Bible, made for a heady brew, but the scope of his vision has endured."[1]

The New Gods are natives of the twin planets of New Genesis and Apokolips. New Genesis is an idyllic planet filled with unspoiled forests, mountains, and rivers that is ruled by the benevolent Highfather, while Apokolips is a nightmarish, polluted, and ruined dystopia filled with machinery and fire pits that is ruled by the tyrannical Darkseid. The two planets were once part of the same world, a planet called Urgrund (German for "primeval ground"), but it was split apart millennia ago after the death of the Old Gods during Ragnarök.[2]

The biblical Book of Genesis recounts, among other things, of the creation of mankind, whom God placed in a garden where all was good. This earthly paradise, referred to as the Garden of Eden, was a place of perfection and bliss:

The biblical Book of Revelation (or "Apocalypse") on the other hand, makes references to Babylon the Great, also referred to as the whore of Babylon, which symbolizes the evil in mankind:

The conflict between the twin planets

The conflict between the two planets symbolizes the struggle of good and evil on a grand mythic scale. However, despite unambiguously representing good, New Genesis and its inhabitants are not entirely perfect. Biographer Charles Hatfield writes, "The saga turns out to be not so simple, for Kirby — and this is revealing – blurs the seeming idealized perfection of New Genesis, adding complexity to his gods."[11] Similarly, John Morrow writes, "Kirby knew that his New Genesis was no heaven. Rather, it was more like the free West during the Cold War, which was threatened by forces from within as well as without."[12]

In Saint Augustine's The City of God (early 5th century), Babylon and Jerusalem referred to two spiritual cities which were spiritually at war with one another, throughout all of history:

Babylon [from Babel] is interpreted confusion, Jerusalem vision of peace. ...They are mingled, and from the very beginning of mankind mingled they run on unto the end of the world. ...Two loves make up these two cities: love of God makes Jerusalem, love of the world makes Babylon.[13]

They also represented two principles at war with one another, inside each individual person, even inside seemingly worldly Christian monarchs; thus Augustine could boast approvingly, "...believing [Christian] monarchs of this world came to the city of Rome, as to the head of Babylon: they went not to the temple of the Emperor, but to the tomb of the Fisherman."[14]

A prophecy foretold that Darkseid would meet his final defeat at the hands of Orion in a cataclysmic battle in the fiery Armaghetto slum of the planet Apokolips.

In the biblical Book of the Apocalypse, Armaggedon (from the Hebrew: Template:Script/Hebrew Har Məgīddō) is the prophesied location of a gathering of armies for a battle during the end times, which is variously interpreted as either a literal or a symbolic location. The term thus has come to be used in a generic sense to refer to any end of the world scenario. The "mount" of Megiddo in northern Israel was the location of various ancient battles, including one in the 15th century BC and one in 609 BC.

The Battle of Megiddo in 609 BC took place when Pharaoh Necho II of Egypt led his army to Carchemish (northern Syria) to join with his allies, the fading Neo-Assyrian Empire, against the surging Neo-Babylonian Empire. This required passing through territory controlled by the Kingdom of Judah. The Judaean king Josiah refused to let the Egyptians pass.[15] The Judaean forces battled the Egyptians at Megiddo, resulting in Josiah's death and his kingdom becoming a vassal state of Egypt. The battle is recorded in the Hebrew Bible, the Greek 1 Esdras, and the writings of Josephus (2 Kings 23:29;2Chronicles 35:20-27). King Josiah is described as a just and righteous king, who feared the Lord, epitomizing the forces of good in mankind. He was the promoter of a program of religious reform, in which he "began to seek the God of his father David" and he began to destroy the Baalist altars and images throughout Jerusalem and Judah:

King Josiah restored the temple of Jerusalem, which had been desecrated by the Assyrians after his father King Acaz had created an alliance with the Assyrian Empire:

The rulers of the twin planets

Highfather, as he appeared in Forever People #7 (March 1972)

Likewise the rulers of the respective planets, Highfather and Darkseid (onomotopeic for "Dark Side"), refer to some extent to God the Father and to Satan. 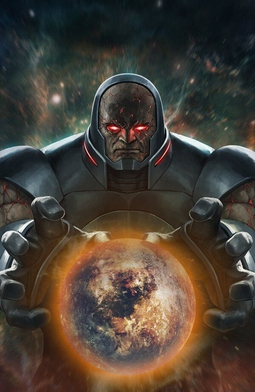 Darkseid is the tyrannical ruler of the planet Apokolips whose ultimate goal is to enslave the universe by eliminating all hope and free will in sentient beings.[16]

Highfather, on the other hand, is a sage and a peacemaker. He was originally known as Izaya the Inheritor, a name which is a phonetic variant of the Old Testament prophet Isaiah. While he was known as Izaya, he could be somewhat compared to the God of the Old Testament under the guise of the God of war. In fact, when Darkseid plotted to instigate an interplanetary war by manipulating his own uncle Steppenwolf into raiding New Genesis and killing Izaya's wife, Avia, he wounded Izaya but purposefully did not kill him, so that Izaya would try to avenge the death of his wife by going after Steppenwolf. Izaya did in fact recover, and became a general in the ensuing war, eventually slaying Steppenwolf on the battlefield. After avenging his wife, Izaya grew sick of the wanton carnage of war and forsook his warrior ways. While wandering the ravaged lands of New Genesis looking for meaning, Izaya came across a mysterious wall where fiery messages appeared; messages from the Source, the mysterious benevolent force overseeing the universe. Izaya was linked to the Source, becoming a peacemaker and planetary leader under the title of Highfather.[17][18] The Source was perhaps inspired by Biblical prophecy, as a turning point of the faith of the People of Israel in God, from the ways of war to the ways of peace.

In the biblical Book of Genesis, God is sorrowed to see evil acts of hatred being committed among men, and regrets having created a being that chose to do evil, to the point of sending the Great Flood to destroy the humanity that had fallen to evil ways and restore the earth to its initial paradisiac state:

However, God was moved to compassion upon seeing the faith of Noah, who accepted to build the Ark upon which two pairs of each living creature were saved. And thus He made a convenant with Noah to never again destroy mankind:

The Prophets, such as Isaiah, speak of a God of compassion rather than a God of war and victory over enemies, as had been depicted in older times, such as in the Book of Psalms:

The Biblical Judges were depicted as carrying out just wars on God's behalf:

The prophet Isaiah speaks instead of a future of peace, in which there will be no more war:

The sons of the rulers of the twin planets

Highfather has a son, Scott Free (also known as Mister Miracle), whose character is in some ways a reference to Jesus Christ as the Son of God, who came to free us from the power of Satan:

Jesus, as Messiah, freed men and women who believed in Him from sickness and death, which are considered as the work of Satan who tries to hinder any form of true happiness for mankind. Jesus is thus considered, among other things, a miracle worker.

Jesus himself proclaimed this to be his mission as Messiah, when reading from the Prophet Isaiah in the synagogue of Nazareth:

In the Gospels Jesus makes a number of references to His power to set us free from the slavery of sin and spiritual death: