The 100 (pronounced The Hundred [2]) is an American post-apocalyptic science fiction drama television series that premiered on March 19, 2014, on The CW and ended on September 30, 2020. The series, developed by Jason Rothenberg, is loosely based on the novel series of the same name by Kass Morgan.[3]

Ninety-seven years after a devastating nuclear apocalypse wipes out almost all life on Earth, thousands of people now live in a space station orbiting Earth, which they call the Ark. Three generations have been born in space, but when life-support systems on the Ark begin to fail, one hundred juvenile detainees are sent to Earth in a last attempt to determine whether it is habitable, or at least save resources for the remaining residents of the Ark. They discover that some survived the apocalypse: the grounders, who live in clans locked in a power struggle; the Reapers, another group of grounders who have been turned into cannibals by the Mountain Men; and the Mountain Men, who live in Mount Weather, descended from those who locked themselves away before the apocalypse. Under the leadership of Bellamy and Clarke, the juveniles attempt to survive the harsh surface conditions, battle hostile grounders and establish communication with the Ark.

In order to maintain order on The Ark, a strict system of justice is put into place, which resembles a dictatorial government more than a democratic form a society. The death penalty by "floating" (expelling someone from the Ark, leaving them to float in outer space without oxygen) was a fairly common practice, even for some crimes which could be considered misdemeanors.

Thelonious Jaha was the last Chancellor of the Council that governed the Ark. As the Chancellor, Jaha had a major role on the Ark, that brought on many hard decisions and challenges, such as ending the lives of hundreds of people in order to save thousands, or choosing to stay behind on the Ark to ensure that some of humanity can return to their home planet. Jaha is portrayed as a strict, trustworthy, organized and understanding person. Jaha shows himself to be fairly wise. He is tough to those that have a problem with him. However, he cares deeply for the citizens of the Ark and is willing to put himself in danger for their safety. He tries to avoid giving himself special treatment, even allowing his son to be part of the 100, and almost becoming part of the Section 17 volunteers.

Thelonious Jaha had a number of people executed for various crimes. As Chancellor on the Ark, he oversaw the execution (by floating on a number of occasions) of Ark citizens including:

When the 100 find arrive on Earth, they find themselves in a situation in which they must organize their own society, and start to lay down their own rules. Some members of the group seem to live by the law of the jungle but endanger the whole group by doing so, limiting their possibilities for survival. And they must come to terms with their own system of justice: how to deal with criminal acts among themselves? They soon learn how easy it is for hatred and violence to continue spiraling more hatred and violence, until it becomes an unstoppable cycle. Unless someone decides to show an act of clemency. And there the qualities of the true leaders shine, as they learn the value of clemency in order to maintain order and unity.

After some initial skirmishes of the 100 with the Grounders, they try to come to terms and find a way of stopping the bloodshed and live together. The Grounders refer to the 100 as "Skaikru" and to themselves as "Trikru", where "Skai" is a reference to the fact that the 100 descended from the Sky ("sky crew" or "clan"), and "Trikru" similarly means "Tree crew" or "clan". However making a pact with the Grounders seems almost impossible, as they seem to live by the law of vengeance, considering only their own losses even when they are the result of their own attack. A saying ingrained in their culture is: "Blood must have blood". But wanting a life for a life is not enough, they are quite a bloodthirsty crowd and would have their scapegoat tortured and bled to death by stabbing by each member of the clan in order to avenge the deaths of their clansmen. The Bible deals with themes of violence and vengeance and clemency ever since the first pages of the Book of Genesis, when Cain kills his brother Abel: God places a mark on Cain's forehead as a warning that no man should lay a hand on him (Genesis 4:15), lest the cycle of violence never come to an end. There is one member of the Trikru clan that is the only hope for creating peace, as he did not agree with the ways of his people, Lincoln.

Lincoln was a warrior from Trikru. In his youth, he saw a small dropship come to Earth from The Ark. He found a badly injured man inside but because he couldn't speak English yet, he couldn't ask the man what was wrong. He brought the man food and water for three days before finally telling his father. Lincoln was then made to kill the man by his father. This experience of his childhood made him understand that this world will always only try to turn him into a monster, which however he does not want. According to Indra, Lincoln has always questioned the ways of Trikru. At some point, Lincoln met Luna of the Boat People on his travels, and she shares his desire for living in peace, without war and bloodshed. Lincoln shows acts of clemency towards the Skaikru delinquents: he spares Octavia's life bringing her into his cave to care for a wound on her leg, though to prevent her from escaping into the woods (and putting herself in danger) he chains her up. In the meantime when Bellamy Blake, Zoe Monroe, Finn Collins, and Jasper Jordan are under attack by the hostile Grounders, Lincoln sounds a horn to falsely warn the Grounders of an incoming Acid Fog.

Eventually the 100 or "Skaikru" make some progress in their peace treaties, and the two cultures start to have greater respect for one another, especially when they unite in order to defeat a common enemy: the Mountain Men.

The mutual trust is not a simple goal, and a number of betrayals ensue.

In season 4 episode 7 "Gimme Shelter", Bellamy is distraught by not being able to go out and save his sister Octavia, who wandered away from Arkadia before the fall of the Black Rain. He eventually reconciles himself with the situation, stating: "You cannot save someone who doesn't want saving". Beyond the reference to being saved from the Black Rain, there is a reference to the choices that Octavia makes for her own destiny: where she shows her loyalty, where her heart belongs, and whether she still wants to see in Bellamy a loving brother who is looking out for her. A similar situation arises in season 4 episode 9 "DNR", in which Jasper and a group of young friends decide to lock themselves into the bar area, with the intent to die there partying away when the radiation from the Nuclear Apocalypse arrives; Jaha wanted to force them to leave, but Bellamy tells him that it would be useless because they have made their choice. To which Jaha replies, "you can't save those that don't want saving". Similarly, there can be no salvation on God's part from the slavery of sin where there is no consent and willingness on man's part to welcome God's grace into one's own life. See Saint Augustine "On Grace and Free Will":

There are some persons who suppose that the freedom of the will is denied whenever God's grace is maintained, and who on their side defend their liberty of will so peremptorily as to deny the grace of God. This grace, as they assert, is bestowed according to our own merits. It is in consequence of their opinions that I wrote the book entitled On Grace and Free Will. This work I addressed to the monks of Adrumetum, in whose monastry first arose the controversy on that subject, and that in such a manner that some of them were obliged to consult me thereon. The work begins with these words: "With reference to those persons who so preach the liberty of the human will."

— Saint Augustine, On Grace and Free Will, Book II, Chapter 66

In season 4 episode 8 "God complex", in one of the first scenes there is a funeral ceremony for those who lost there lives in the fall of the Black Rain. Thelonious Jaha concludes his funeral speech in their honor stating "May we meet again", to which the crowd responds in unison "may we meet again". This simple exclamation bears witness to mankinds innate desire for a life after death, where we can again meet with our beloved. Niylah also sprinkles some ash over the bodies of the deceased, reciting a prayer in her own tongue, which she translates for Clarke as "From the earth we will grow, from the ashes we will rise". Again a reference to death as a passage to new life, which inspires Jaha to continue the search for the twelfth bunker. While speaking about this with Kane, they realize the significance of the infinity sign which had become the sacred symbol of the Grounder religion. 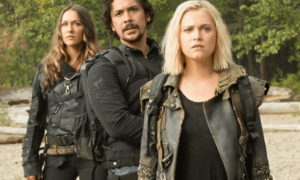 In season 4 episode 8 "God complex", Roan makes a statement which recurs often during the series:

Luna: "Is there no line you won't cross in order to survive?"
Roan: "Survival requires sacrifice."

In this context, sacrifice always refers to sacrificing someone elses life for one's own survival or that of one's own people or clan, according to the Roman saying "Mors tua vita mea". This is the law of the jungle. But does it truly make us human? Kane states at one point during the episode: "I believe that 'blood must have blood' will be the end of us all". In this same episode, the group gathered to experiment on a cure by synthesizing Nightblood find themselves in the position of risking lives while trying to synthesize the Nightblood. However Clarke realizes that by forcing others to sacrifice themselves unwillingly cannot be a humane means to reach their goal, which if successful would be able to save all of the clans. The end cannot justify the means, so Clarke finally makes a decision to sacrifice herself instead of sacrificing Emori, thus breaking a continued intergenerational cycle of hatred born from forced sacrifices.

The protagonists of the story are young people who find themselves taking on the responsibility of leadership, of protecting those for whom they are responsible, of creating alliances, in the context of survival from the menaces of natural disasters and incursions from foreign tribes. The question that surfaces continuously throughout the story, is if they will be capable of keeping their humanity and breaking endless cycles of violence, rather than living as beasts and perpetrating violence not only towards foreign tribes but also asking themselves. This same reflection is the basis of the 1954 novel Lord of the Flies by Nobel Prize-winning British author William Golding, in which the story focuses on a group of British boys stranded on an uninhabited island and their disastrous attempt to govern themselves, considering the conflicting human impulses toward civilisation and social organisation—living by rules, peacefully and in harmony—and toward the will to power. The Lord of the Flies presents a but of humanity which is quite unimaginable before the horrors of Nazism, plunging into bleak speculations about mankind in the state of nature. Both the Lord of the Flies and The 100 are cynical and portray humanity exclusively as selfish creatures.